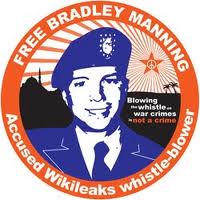 The UK government has formally raised concerns with the USA regarding the treatment of the imprisoned US soldier Bradley Manning, who is charged with various offences under military regulations and the US criminal code.
It is widely believed - though not proven - that Manning was the source of much of the classified US government material published in recent months by the Wikileaks website: in particular the secret diplomatic cables whose revelation has caused various minor furores around the world.


Manning's lawyer has complained that the regime under which he is held in the US Marine brig at Quantico, Virginia, amounts to unlawful pre-trial punishment. He is kept solitary in his cell 23 hours a day, his clothes are taken away at night, and if he can't be clearly seen by his jailers (for instance due to having his face covered by a blanket) he will be awakened every five minutes at night.
The US Marines say that these are normal measures they are compelled to take for any military prisoner regarded as being a suicide risk - which they consider Manning to be. Nonetheless Manning's supporters have branded the treatment inhumane.


Owing to the fact that his mother came from Wales, Manning would be able to claim British nationality if he chose to do so: however, his lawyer says he makes no such claim and doesn't seek any British assistance.

Meanwhile President Obama has stated that he is personally satisfied with Manning's treatment. An Obama administration official, P J Crowley, who publicly criticised the brig regime, has lately been forced to resign.
Against this background Labour MP Ann Clwyd has tabled an early-day motion in the House of Commons which has gained cross-party support, which was debated in the Commons yesterday. The motion says:

This House expresses great concern at the treatment of Private First Class Bradley Manning, currently detained at the US Quantico Marine Base; notes the increasing level of interest and concern in the case in the UK and in particular in Wales; appeals to the US administration to ensure that his detention conditions are humane; and calls on the UK Government to raise the case with the US administration.

Clwyd added that she was not raising the matter because of Manning's potential claims to British nationality, which were in her view "something of a red herring. I am not raising Bradley Manning's case because he is a British national but because I believe his treatment is cruel and unnecessary."
Yesterday in parliament, the Conservative MP Julian Lewis spoke in support of this position, saying that "if Private Manning is guilty of the leakage of which he is charged, he did a very terrible thing indeed", but that "it is fatal to snatch defeat from the jaws of a sort-of victory by focusing attention on the conditions in which he is being held".


A senior official in our embassy in Washington called on the US State Department on 29 March. He drew its attention to her concerns over Private Manning and handed over a copy of the uncorrected transcript of [an earlier debate on the matter among MPs] and a copy of her early-day motion ... He also drew attention to the debate taking place today as a measure of the level of parliamentary interest in the subject. The State Department took note and agreed to convey the information to all those dealing with the case.

Bellingham added that "I will instruct our officials at our embassy in Washington again to report the concerns of this House to officials in the State Department", for what that might be worth. However, on the point of Manning's status as a Briton he said "we must respect his wishes on the matter and recognise the limitations on UK involvement"
http://www.theregister.co.uk/2011/04/05/manning_uk_politicos_concerned/

Posted by SteelMagnolia at 7:01 AM