Soldier in Leaks Case Will Be Made to Sleep Naked Nightly 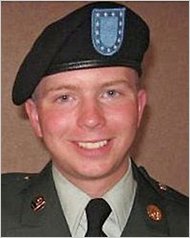 Private Manning will also be required to stand outside his cell naked during a morning inspection, after which his clothing will be returned to him, said a Marine spokesman, First Lt. Brian Villiard.

“Because of recent circumstances, the underwear was taken away from him as a precaution to ensure that he did not injure himself,” Lieutenant Villiard said. “The brig commander has a duty and responsibility to ensure the safety and well-being of the detainees and to make sure that they are able to stand trial.”

Private Manning is a maximum-security detainee under “prevention of injury watch,” a special set of restrictions — a step his supporters, who contend that he is not suicidal, have said is unjustified. He has not been elevated to the more restrictive “suicide watch” conditions.

Lieutenant Villiard said the new rule on clothing, which would continue indefinitely, had been imposed by the brig commander, Chief Warrant Officer Denise Barnes. He said that he was not allowed to explain what prompted it “because to discuss the details would be a violation of Manning’s privacy.”

In recent months, Private Manning’s supporters have criticized his treatment as unduly harsh, contending that he is being pressured to agree to implicate Julian Assange, the WikiLeaks co-founder, as a conspirator in the leaking of diplomatic and military files. Lieutenant Villiard denied that the new conditions were intended to “pressure or punish” Private Manning.

Private Manning’s lawyer, David E. Coombs, first complained in a blog posting on Thursday that his client had been stripped the previous night, and wrote on Friday that it had happened again. He criticized the measure as an unjustified “humiliation” of his client.
“There can be no conceivable justification for requiring a soldier to surrender all his clothing, remain naked in his cell for seven hours, and then stand at attention the subsequent morning,” he wrote. “This treatment is even more degrading considering that Pfc. Manning is being monitored — both by direct observation and by video — at all times.”

Mr. Coombs contended that stripping his client was medically unjustified.

“If a person is at risk of self-harm, then you get them treatment, you get them to a mental health professional and address the issue — you don’t strip them,” he said, adding in a separate telephone interview, “There is no excuse, no justification to having a soldier stand at attention naked. There can be no mental health reason for that.”

Lieutenant Villiard, who says Private Manning is permitted to have two blankets at night, says detainees are awakened each morning and immediately come out of their cells. Private Manning cannot be given his underwear back before then, he said, because that would require waking him up ahead of time.
Posted by SteelMagnolia at 1:21 AM