Welsh supporters for Bradley Manning, this page has sinced been removed but luckily it was cached.

Campaigners from Wales have travelled to London to protest over the alleged treatment of a US Army private accused of leaking confidential papers.
Bradley Manning, who attended secondary school in Pembrokeshire, faces scores of charges over the documents handed to the Wikileaks website.

But there has been mounting concern about the conditions he is being held in at a military prison.

Rallies highlighting his plight were held across the US, Canada and Europe.

The 23-year-old's mother is Welsh and still lives in Pembrokeshire, where he grew up from 13 to 17.

He went to Tasker Milward school in Haverfordwest, where the now retired deputy head teacher, John Broughton remembers him as "a very pleasant lad". 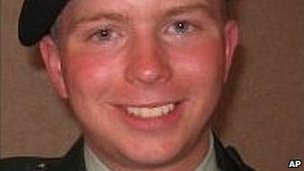 Pte Manning was a US intelligence analyst in Iraq
Protester Vicky Moller, from Newport, Pembrokeshire, told the BBC: "His mother was allowed to visit him last month. His mother has had several strokes. She was really damaged by what happened to him and so she now speaks through her sister.

"Her sister went with her to the prison. Her sister was not allowed in so she couldn't speak to her son and she's been very, very upset ever since."

Last week Cynon Valley MP Ann Clwyd tabled a Commons motion on the issue.
"I think it is a serious case," she told BBC Wales.

"He's being held in solitary confinement, he's kept in his cell for 23 hours a day, not allowed to exercise, he's stripped of all his clothes during the night, he is not permitted to sleep during the day.

"Organisations like Amnesty International have already put out several press releases saying that Manning is being subjected to cruel, inhuman and degrading treatment."
In her early day motion, Ms Clwyd calls on the UK government to raise the issue with US counterparts, and to ensure the soldier's "detention conditions are humane" at the US Quantico marine base.

Despite his Welsh mother, it is understood that Pte Manning does not have a British passport, and has not asked for UK assistance.

But his connections have prompted some to organise buses to join a rally in London on Sunday against his detention.

Speaking before the demonstration Ms Moller said: "Whether he is innocent of what he is charged with I don't know, but he is an innocent personality.

"He is young, he is well motivated, and I know that sensory deprivation like isolation is one of the cruellest things you can do to a person.

"When I realised there was a Welsh connection, I felt that Wales could do something about it."